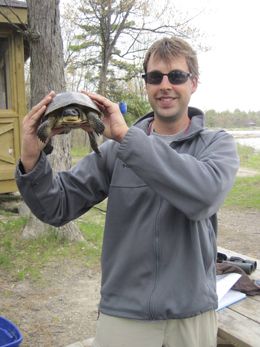 McMaster researchers are learning about one of Earth’s oldest creatures by using some of its newest technology.

Bob Christensen, a master’s student in the Faculty of Science, is currently on Beausoleil Island in Georgian Bay studying the Blanding’s turtle – a medium-sized reptile considered threatened throughout much of its range. Using a combination of radio transmitters and GPS devices, Christensen is tracking the daily, and even hourly, movements of the turtles as they nest and breed in the hopes of gaining a better understanding of the species’ essential foraging, nesting and overwintering sites.

Assisting Christensen is undergraduate research technician Chantel Markle who will conduct her senior thesis using remote sensing and GIS techniques to map critical habitat features on Beausoleil Island. By relating these to the turtles’ migration patterns, which are not fully understood by scientists, the team hopes to determine which island areas should be protected and which could be considered “travel corridors” for turtles on the move.

While tracking devices have been used in the past on sea turtles, the project is the first to use such technology on the much smaller freshwater turtle – though it hasn’t come without its challenges.

“Much like you lose your cell phone signal when underground, when the turtles hide under thick bush or in crevices we lose the ability to track them via GPS,” said Pat Chow- Fraser, a professor of biology and Christensen’s faculty supervisor. “The device’s batteries also wear down quicker this way, so we’ve had to learn and adjust the way we do things along the way.”

Similar technology is being used by Jon Midwood, a PhD candidate also supervised by Chow-Fraser, to study northern pike in the eastern Georgian Bay region. By inserting radio transmitters into the fish, Midwood hopes to confirm that pike travel among multiple coastal wetland areas.”The Ontario Wetlands Evaluation System provides protection for wetlands that are greater than 2 hectares, but smaller wetlands can be linked together for protection should their be biological rationale,” said Midwood. “If we can prove that pike move throughout many of the small wetlands in the region, we can better make the case for protecting those areas.”

The research is important not only for species conservation, but for the sport fishing industry, which is reliant on healthy populations of fish such as pike for survival.

Christensen and Midwood plan to continue their work over the next two to three years.